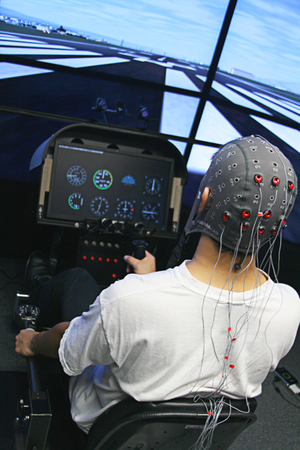 Vection “refers to the perception of self-motion induced by visual stimuli. An example of this sensation is that if one is seated in a train parked at the station while the train next to it pulls out from the station, one may have a sustained sensation that one is moving in the opposite direction.”

As we move our brain into the virtual world our minds react to the false visual rich environment as if  the environment were real for our sensory response. The sense of visually induced self-motion  appears in concussed people without them being aware that their vection sensing problem exists. The current lack of sensitivity of traditional neuropsychological testing tools has revealed they are not able to discriminate brain dysfunctions in people suffering mild traumatic brain injuries, i.e. concussions. The usual array of brain imaging tools, computerized tomography (CT) and magnetic resonance imaging anatomical scanners,  are essentially saying patients are asymptomatic within 10 days following the injury impact. During the 33rd Annual International Conference of the IEEE EMBS in Bostan, Massachusetts during August 30 to September 3, 2011, researchers Semyon Slobounov with Wayne Sebastianelli and Karl Newell presented their study, Incorporating Virtual Reality Graphics with Brain Imaging for Assessment of Sport-Related Concussions.

The rationale behind their study showed concerns that, “……visual-kinesthetic tasks are the most common symptom in traumatic brain injured patients having suffered sport-related concussions and that balance symptom resolution varies and may last up to more than one year following injury.” Tellingly, the authors stress, “There is no single concussion alike,in terms of initial symptoms, at the site of injury, therefore in symptoms resolution, as the injury evolves over time.” The group takes the approach to examine  multiple modalities, which include, balance, neurocognitive functions and associated neural substrates.” Patients who are essentially asymptomatic from a single concussion event show, ‘residual functional abnormalities.’ The author used a virtual reality graphics system to examine how the brain activation patterns precede the loss of postural stability induced by their ‘ Moving Room’ experimental paradigm. The work involved designing visual perturbation  balance tasks by enabling the participants to experience the sense of presence and to track the changing  brain activation patterns via EEG comparing both normal controls against concussed individuals during exposure to the Virtual Reality-driven postural task conditions of the Moving Room.

Balance abnormalities are the most common symptom seen in traumatic brain injury/concussed suffering patients specifically evident during visual-kinesthic tasks involving advanced methods capable of detecting changes in postural control. By showing participants their Moving Room the researchers are able to tease out the detection of postural abnormalities with their hypothesized compromised brain integration as a sensation of a loss of balance for the participants exposed to the various oscillations of the Moving Room. Preprogrammed visual manipulations of the moving room were especially effective when rolling around the y-axis (10-30 degrees) and pitching around the intra-aural x-axis also at 10-30 degrees at 0.2 Hz. Yawing around the vertical z-axis did not induce as much of a vection effect with the manipulated Moving Room task. The participants stood on an AMTI force plate in the Romberg stance for each 30 sec trial. The Center of pressure from the force plate was calculated for each VR Moving Room stimulation. A NeuroScaan EEG system electrocap (similar to the VR helicopter pilot picture) captured the brains’ predicted theta power activation  from the normal volunteers as the balance task progressed, which is associated with successful performance of the perceptual motor task. No significant theta power was present however in the concussed participants as the trial progressed over the frontal-central electrode array digitized output. Essentially the normal controls adapted to  the confusing pitching-yawing- rolling Moving Room’s projected image by demonstrating, “…. intact visual-kinesthetic integration in control of balance.” This finding was also confirmed with an increasing mean center of pressure, within the stability limits as inducing postural reorganization of  the subjects’ head, trunk and ankle responses. In contrast, none of the concussed participants were able to preserve their balance on the AMTI force plate while viewing the Moving Room on day 3 post concussive injury described as ,…” visual-kinesthetic disintegration induced by conflicting visual field motion stimulation.”

In summing up the researchers reflect with, ” The absence of prominent enhancement of central-frontal EEG theta power in concussed individuals, in conjunction with balance problems may indicate impaired neural substrates responsible for focused attention when more challenging postural stance are either required or executed.” Or possibly as I mentioned in the GyroStim essay, maybe their eye muscles are still demeshed from their vestibular anticipation capacity within those critical brain circuits as the pitching or rolling Moving Room affects thier eye tracking capacity.  The researchers final conclusion asserts, “….a residual disturbance of the neuronal network that is involved in execution of postural movement.” The authors propose a new Vection Sensing Grading Scale of concussion be considered describing the asymptomatic presence of visual-kinesthetic disintegration induced by visual field motion as detectable altered brain function output.