Posted on September 6, 2012 by cerebrovortex

Alex Zanardi is my hero.

Eleven years ago leading  at a CHAMP car event in Lausitz, Germany, Alex Zanardi’s Reynard-Honda was hit by Alex Tagliani’s racecar at 320 kph as Zanardi excited from the pits, instantly slicing his chassis in half in a horrific accident that also severed off both his legs. During the helicopter ride to the trauma center he was given his last rites. Only two pints of blood were left in his mangled body. The surgeons had to restart his heart seven time in the course of the surgery trying to repair to his massive wounds.

Today, 45 year old Alex Zanardi,  drove his own design of one man race machine during Handcycling Time Trials at Brands Hatch that he set fastest lap on years ago, by winning a Gold Medal in the 2012 Paralympic Games, finishing 27 seconds faster than the nearest competitor, German racer silver medalist Norbert Mosandl, with American, Oscar Sanchez taking the bronze medal. 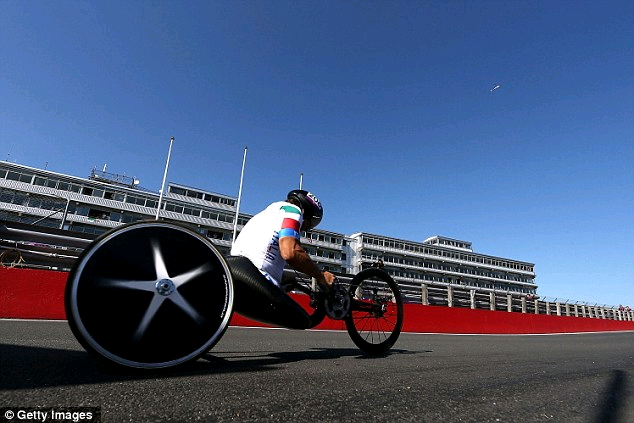 In his own words he mixes a feeling of sadness with utter joy to the enormous amount of hard work for his recovery, learning to cope with a loss of both legs, not feeling sorry for  himself. It is a astonishing accomplishment.

‘It’s an amazing feeling, I’m really, really happy for the result,’ Zanardi said. ‘I knew this moment would bring a  little bit of sadness as well. I would lie to you if I said I was happier than two years ago.’

‘When you choose the right horizon in life and you start to be pushed by your passion, every day is a great opportunity to meet happiness.

‘On Monday I will have to find something different,  otherwise life will become a bit boring. I will give my wife a good week, to relax, to go shopping, to do all the women things, and then back to business.’ 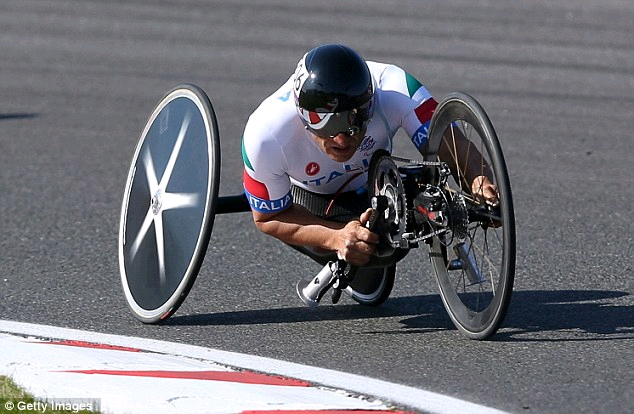 What Alex Zanardi had to accomplish is teach his brain how to re-balance itself completely just above his torso without any  lower proprioceptive capacity, essentially rewiring his entire balance apparatus within his brain.

‘It seemed a stupid thing to do to drop everything. It was against all odds. But it’s not the first crazy thing I did in life. In the end I was right.

‘You should not chase pipedreams, but if you have a horizon to look into, happiness is just around the corner.’

It has been one year to the same week that I have started cerebrovortex.com. I am loving doing brain research that much is clear for me. I am dedicating the next year to the incredible example of Alex Zanardi toward how to relearn balance in our own brains, as a means to recover from concussion. His example is a shinning missive that will resonate in the back of my mind. I remember him saying something to the effect of, “…you would not believe how many times I fell as I learned how to move about again, you would not believe how many times. ”

Reflecting on my own journey during the last year I have advanced a lot but not as much as Alex Zanardi has, so that is the challenge in front of me right now. I will work diligently toward improving my knowledge and skill set to understand brain concussion deeply to not give up, that is the big lesson that Alex Zanardi has for all of us.

Seek out the happiness of all your deserved accomplishments.

“I was ecstatic when I heard the race  was coming to Brands Hatch which is a circuit that I’ve always loved. If you had asked me a few years ago whether I would take part in the Paralympics at this circuit, I would have asked you what you were on.”

“I can remember him getting up on stage at the Autosport Awards at the end of that year, (after recovering from his crash) on his prosthetic legs, and the atmosphere was incredible.

It is an overused word but the manner in which he has come back from his accident is nothing short of inspirational. More than just his achievements, which have been considerable — a return to professional motor racing, wins in German touring cars, an F1 test, and now his hand cycling career — it is his attitude to life. His boundless energy.

He sees his disability not as a life-sentence but an opportunity. He says now that the crash was his “ticket” to the Paralympics.

Alex may not have had much fortune in Formula One but he is living proof that you make your own luck in life, through hard work and a positive attitude.”