This important blog post comes via the New York Times : AUGUST 14, 2013, A Simple Device to Detect Concussions written by Gretchen Reynolds concerning the reaction test to detect the presence of a concussion. Here’s how it works from a validated clinical study published recently in the British Journal of Sports Medicine by Steven P. Broglio, director of the University of Michigan’s NeuroSport Research Laboratory with his colleague Dr. James Eckner, an assistant professor of medicine at the University of Michigan.

“After some noodling, Dr. Eckner came up with the idea of attaching a hockey puck via adhesive to a long wooden dowel, and marking centimeters in ink along the length of the dowel.”

“To use the device, an evaluator simply holds it in front of an athlete who is seated at a table with one arm resting on the surface and his hand at the table’s edge. The evaluator aligns the puck with the bottom of the athlete’s hand and lets go. The athlete catches the falling stick. The evaluator marks where his hand lands, and, voila, a coach or trainer has a baseline measure of someone’s reaction time. Theoretically, should a player later be suspected of having sustained a concussion, the trainer could pull out the dowel-puck, repeat the test, and, if the player’s reaction time were slower, conclude that he or she likely was concussed.” 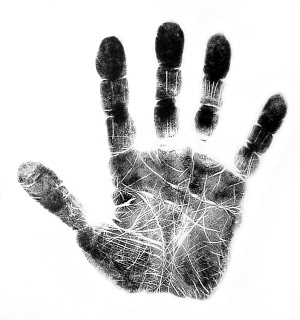 Think of a hockey stick with cm markings along the length of the stick. If a trainer holds the stick vertically the player, seated beside the trainer, the testing for a concussed player has his forearm resting on a table. A start line from a baseline mark is placed just at the level of the preferred grasping hand of the player. Without warning the trainer releases the hockey stick from his grasp. The player must grasp the stick now rapidly falling through his/her open grasp. The distance to the grasped measurement is marked. The test can be repeated 5 times to establish reaction distance accuracy, the range of points is also marked on the stick.

If the baseline range is exceeded, this distance will be statistically representative for a longer reaction time known to be associated immediately following a strong enough concussion. No complicated computer -no blood test, simplicity in its finest element. Plus the player can’t hide the symptoms now, the baseline distance can’t be fudged, since its the reaction time that will have changed.

What is happening here?  I will attempt an explanation. The concussion may or may not involve a separate rapid deceleration of the eyes themselves. The eye is attached with muscles in the bony orbit. Behind the eye structures the nerves controlling the iris, the eye muscles and the visual nerve all course their way into the various entry points to the brain, usually at the level of the upper brain stem. These are all tethered nerves stretched during the violent deceleration impact, depending on the extent of direction and rotation into the head. The positional X-Y-Z information is also corrected according to the head position of the facing forward of the head via the vestibular system. Virtually most of the brain is used to process this information watching while grabbing a falling hockey stick through one’s fingers. It is within this entire response loop that the hand to grasp onto the gravity directed hockey stick must be accomplished. Dr Broglio and his colleagues were stunned to differentiate a delay of as much as 1 second extra after a concussion. Performing a rough test in my garage of 1 second extra is about 20inches of extra drop along the shaft of the hockey stick !

Forget all the fancy elaborate expensive testing trying to determine if a concussion has happened. It’s now using any hockey stick for testing. Also each player can establish their own grasping distance before their season starts. Then in the unfortunate event of suffering a concussion the baseline fall distance is compared to the post concussion distance. Thank you Dr Broglio for bringing simplicity into the diagnosis of a brain concussion.