Inside the mother’s womb this baby is yawning. At around the 20th week into gestation the baby starts the elaborate sequence of yawning. The muscles involved inside a yawn begin a priming sequence that lasts for 10 weeks perfecting this elaboration, this coordination of all the muscles in the head and neck including the diaphragm. ” A yawn is a coordinated movement of the thoracic muscles in the chest, diaphragm, larynx in the throat, and palate in the mouth. By yawning, we help distribute surfactant (wetting agent) to coat the alveoli (tiny air sacs) in the lungs. Generally speaking, we cannot yawn on command.” (The Library of Congress-Science Reference Services)

Yawning is the most democratic of reflexes. Dictators, saints,old, young, every person of every nationality to live on Earth yawns at least 1/4 million times during their lifespan. The display is so common as to be missed as being so regular, so normal. Except for autistic children, who neither yawn inside their mother’s womb nor outside as children. What is the difference, what is the significance for all mammals to yawn? All fish, all birds, all snakes, all alligators, all dogs, all cats, all rats every single creature yawns each and every single day. What can this harmonizing activity be so important what is the most significant necessity to have all mammals trigger a yawning sequence? It looks like the answer is gravity sensing.

The vector of gravity has always been present since life first established the essence of coherence on Earth. The sensing of down has been a stable imperative since the beginning of evolution as life as we know it originated. Until this generation of humans no other group of humans has been able to rise out of the grasp of gravity, except during the first few flights of aircraft as pilots suddenly had to adapt to massive accelerations inside tight turns sometimes blacking out to crash as the forces pulled their consciousness into oblivion. Since the first astronauts began losing the grip of gravity as if they were cloaked over their bodies entire metabolism by altering their very vestibular sense of determining direction. Living inside zero gravity is a gravity storm vortexing into the brain especially within the vestibular system. Inside that vestibular system our own inborn accelerometers, accurately establishes a coordinate reference of X-Y-Z within each sense of head position- each sweep of the eyes is now jaded into a new pattern of adaptation within the astronauts’ brain, as if free-falling inside their space ship. Evolution has always had gravity as the pinnacle of reference until the first astronauts began to experience weightlessness. 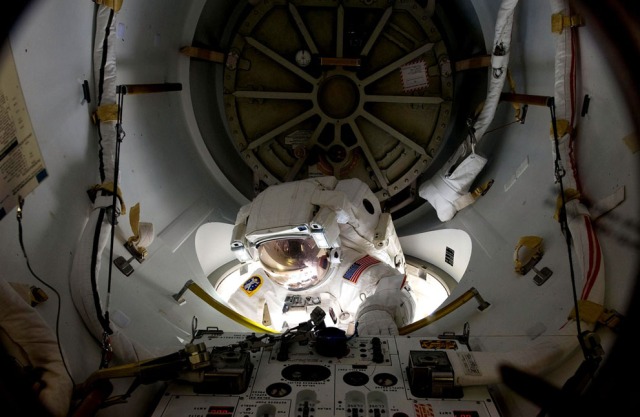 As the astronaut rises silently past the air lock into the glare outside of the passing event horizon he scans the majesty of the vista around him. Overcome with the extraordinary ink blackness surrounding him he prepares for his assignment. Yet he is violently dizzy yet he soldiers on despite the turmoil in his sense of position within his consciousness. He can’t escape that his brain will adapt to this perception as it always does. He feels as if he is hanging upside down even though the Earth is just below his feet. His brain is cloaked as if in the veil of an autistic child trying to comprehend something just within his grasp. The astronaut wants to spin on his axis to make sense of this confusion flying inside his minds self conversation.

astronaut with the brain of the autistic child. Where might these two brains overlap? It’s like trying to line up tracing paper of one brain image zone over the other. The referencing points might be not completely overlapping but this approach is tantalizingly similar as to make the observer gasp at the craziness of the idea comparison. What characteristics might these two overlaps share? First, there is the vestibular anomalies the autistic child senses, as if untethered to the reference to gravity as is the similar sensation within the vestibular apparatus of the floating astronaut. Both of their eyes are deceiving their individual interpretation to their immediate sensations. In time both the autistic child and the astronauts bones are thinner than they should be. That is the beginning of the query how to make the comparison. They both share vestibular derangement and the effect can be seen inside their bones very structures. (J Autism Dev Disord. 2013 Jul;43(7):1623-9 Bone density in peripubertal boys with autism spectral disorders by Neumeyer AM, Gates A, Ferrone C, Lee H, Misra M, Lurie Center for Autism, Massachusetts General Hospital and Harvard Medical School and J Autism Dev Disord. 2008 May;38(5):848-56. Reduced bone cortical thickness in boys with autism or autism spectral disorders by Hediger ML, EnglandLJ, Molloy CA, Yu KF, Manning-Courtney P, Mills JL. Division-of Epidemiology, Statistics and Prevention Research, National Institute of Child Health and Human Development, National Institutes of Health, Department of Health and Human Services, Bethesda, MD 20892-7510, USA.)

Faced with the terror of a vestibular storm inside the upside down world of the astronaut he begins to feel the grip of panic. In this type of stimulus his best response would be to yawn, to prepare his brain to engage, yet he can’t yawn. ” …Dr. Robert Provine in 2005 suggests that yawning is “associated with the change of a behavioral state- wakefulness to sleep, sleep to wakefulness, boredom to alertness…” The autistic child when faced with a similar panic entrapment will also not have the capacity to yawn within his reflex repertoire.  Another subtle clue in these overlapping brains is the parental anecdotal remark that …’ when our child has a fever it is as if the cloak of autism rises temporarily.’ “Generations of parents of autistic kids have reported that when their child runs a fever, the symptoms of autism seem to abate. When the fever goes down, the symptoms return. In 2007, a paper in the journal Pediatrics reported on that phenomenon and confirmed that, yes, the parents’ observations are right.” (TIME April 7 2009-Jeffrey Kluger) “What no one had done before, at least not formally, was tie it to the brain zone, the locus coeruleus — that is, until Drs. Dominick Purpura and Mark Mehler of the Albert Einstein College of Medicine published in the journal Brain Research Reviews.  The brain region that drew the attention of the authors is known as the locus coeruleus, a small knot of neurons located in the brain stem. Not a lot of high-order processing goes on so deep in the brain’s basement, but the locus coeruleus does govern the release of the neurotransmitter noradrenaline, which is critical in triggering arousal or alarm, as in the famed fight-or-flight response. Arousal also plays a role in our ability to pay attention — you can’t deal with the lion trying to eat you, after all, if you don’t focus on it first. And attention, in turn, plays a critical role in such complex functions as responding to environmental cues and smoothly switching your concentration from one task to another. Those are abilities kids with autism lack. “

So we begin to see the overlap between the panicking astronaut and the panicking autistic child within their brain stem circuits involving the locus coeruleus, each facing the fight or flight response. It is not the basement of the brain as the TIME author reported it is the most ancient portion of the brain what can be termed the reptilian brain that deals with stress. One system that controls fever, stress and it would also implicate yawning too.

” We came to the conclusion that there could only be one system that would both ameliorate the effects of autism and govern fever.”

“It’s not often that a mere flash of insight — as opposed to a formal, controlled study — commands much space in a medical journal, and Purpura and Mehler readily concede that a good deal of empiricism will have to be applied to their theory before it can become anything more than that. Still, they’re convinced that the idea deserves attention. If the locus coeruleus is indeed malfunctioning in autism, the problem could involve hundreds or even thousands of genes. The researchers are careful to avoid the shooting war over what damaged those genes, suggesting that environment and toxic chemicals — but not vaccines — may have a role. They also, tellingly, think stress is involved.

Stress is thought to have a significant impact on the ability of the locus coeruleus to regulate noradrenaline properly, and Mehler and Purpura cite an improbable 2008 study published in the Journal of Autism and Developmental Disorders showing that mothers who lived through a hurricane during their pregnancy — particularly at the mid-gestational point — had a greater likelihood of giving birth to an autistic child than other women. “What would be involved here would be the mother’s level of [the stress hormone] cortisol,” says Purpura. “Between fetus and mother, the placenta acts as a very good barrier for maternal cortisol, except when the stress is extreme.”

“More recent studies have suggested that yawning might be connected to brain temperature (Gallup and Gallup, 2008). When the brain becomes warmer than the homeostatic (stable) temperature, we might yawn to cool the brain. It is theorized that cooler blood from the body floods into the brain and the warm blood circulates out through the jugular vein.”

Both the panicking astronaut and the panicking autistic child can’t contain the swirling stress inside their brain stem, they both need to yawn to start their containment reflex, both can’t yawn. The autistic child has a destabilized vestibular apparatus and the astronaut is not sensing gravity, which is also a destabilized vestibular apparatus. Gravity sensing is the common link between these two panicking people. Therefore gravity sensing is the reflex of yawning. 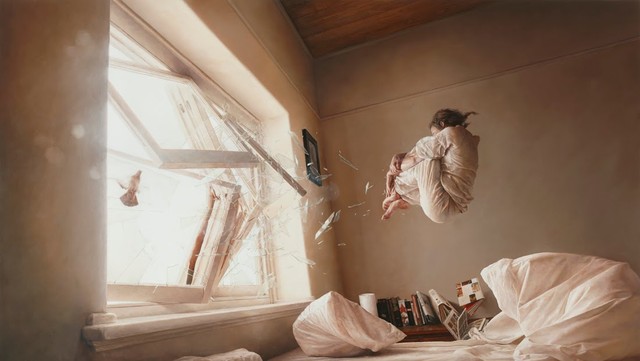 Think of an autistic child untethered to gravity, think of their helplessness their constant panic. They are teaching us a very precious lesson. The sensing of gravity is the pinnacle that orients all are brain’s behaviour to all sensory input, including our very bone structure. Think of the autistic child as a disabled astronaut who desperately needs our resources to deal with his predicament. We have to nurture them back into the gravity field of sensing life within their brain. That is all our challenge.

One of Commander Chris Hadfield’s biggest challenges upon returning to Earth after his 5 month stint as International Space Station Commander was to try to reestablish bone density following the severe bone loss experienced as a consequence during his time in weightlessness.

My question to Commander Chris Hadfield is this: Did you keep track or notice the number of times you yawned during those 5 months on the International Space Station? I bet you yawned a lot less than you usually do in gravity. Now that you’re back on Earth gravity I bet you yawn more regularly, or maybe not?