The shock of impact was felt into the neck of the majestic bird. Diving into the glint of ocean waves toward the speckle of a school of fish the gravity descending bird did not perceive the hidden log just below the surface. The collision was dampened by the surrounding water, the bird used to the shock of hitting the interface but this time was different, the bird was dazed. Somehow swimming up into the bursting light at the junction of water with air the bird gasped to flounder in confusion. Everything was spinning.

What happens to the eyes during a concussion as the brain moves ? The eyes move.  But behave as tethered objects held in their sockets strained by the muscles that permit their rotation, their gazing up or down, their sweep side to side. The eyes acting as tiny orbs stretched into tension whiplash like the release of a slingshot ball snapping in on their trajectory at the moment of impact. The energy is translated not only into their surrounding socket structures but further into the bone tunnel connecting their very attached nerves within the brain stem. It is not as if the bird loses sight but worse the bird suffers brightness overwhelming the diaphragm of the iris but especially the pivoting skill of eye rotation, the up and down eye positioning that had been so smooth before.

Jamshid Ghajar, MD, PhD , chief of Neurosurgery at Jamaica Hospital-Cornell Trauma Center, clinical professor of Neurosurgery at Weill Cornell Medical College and President of the Brain Trauma Foundation in New York City is developing just such a specific www.cerebrovortex.com observation toward developing eye tracking as a means to diagnose brain concussion. According to Dr. Ghajar, ” There are also no methods to accurately measure attention continuously. Brain concussion (minor traumatic brain injury, mTBI ) patients may experience subtle but frequent lapses in attention that are not detected by any assessments with low temporal resolution. Therefore, the development of a rapid yet sensitive plus reliable test is necessary in order to detect, to grade subtle cognitive impairments due to injury. Can we generate accurate diagnoses for mTBI patients using faulty eye positioning? The Cognitive and Neurobiological Research Consortium investigated chronic mild TBI in civilians and provided anatomical quantification of the degree of diffuse axonal injury (DAI) using MRI-diffusion tensor imaging. Based on this anatomical quantification, we aimed to determine whether performance variability during visual tracking can provide a useful screening measure for mTBI. We also aim to develop a diagnostic protocol of attention metric for mTBI.”

” Undiagnosed and untreated mTBI has become a significant problem for men and women serving in Iraq, and the Department of Defense expressed an early interest and funding in the eye tracking project.  In September 2008 the DoD awarded BTF a four-year grant $4.6 million grant to develop a portable eye tracking device that can be used on service men and women in the field to instantly determine if they have suffered any brain damage as a result of blast injury or another type of head injury.  The researchers at BTF have been working with engineers and researchers at the United States Army Research Institute of Environmental Medicine to develop this device that will revolutionize the way mTBI is diagnosed and help insure that service men and women with brain injury get the care that they need and are not sent back into the field where they could potentially be in harm’s way.”

Where inside the human anatomy of the head do the eyes behave as if tethered objects stretched by the rebound of shock happening with brain concussive deceleration forces? Let’s examine some anatomy maps. 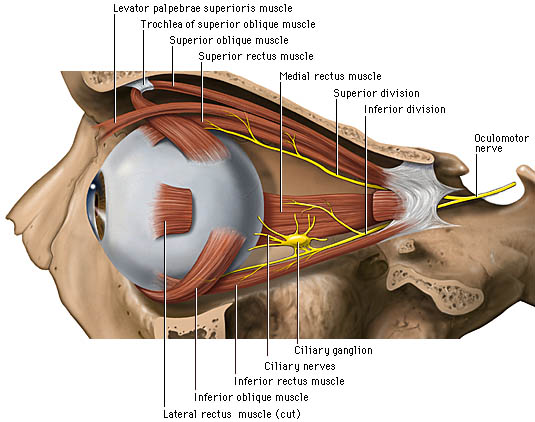 Acute vulnerability enters at the foramen magnum during a concussive force since the energy is strained into the longest tethered segment of cranial nerve, the abducens nerve, CN VI. In the above diagram the cranial nerves are listed as numerics. Pay attention to the vulnerable insertion zones into the upper brain stem of cranial nerves 3, CN III occulomotor, cranial nerve 4, CN IV trochlear and cranial nerve 6, CN VI, abducens respectively.

The pelican doesn’t understand the shock to its eyes. It swings its head positioning while immobile as the unstable response to this violent contact stirs the visual field into swirls of colour. The bird is dizzy, mesmerized by false balance sensation. The far horizon line is actually looping as if inverted motion gyros overhead. The bird thrusts its head into the waves splashing into the coldness. The bird fails to perceive the form beneath the waves, which engulfs the spinning spectacle of its twisting visual field into fury then only darkness.